Managing pain can be a serious and problematic issue. While there is a wide array of painkillers currently on the market, almost all are opiate based. Opiates, derived from the opium poppy go back in history thousands of years. Some claim that people have been using opiates since 4200 BCE (Before Common Era). Although we may have been using the drug for millenniums, it wasn’t popularized until the early 17th century, China. While people had been orally using opium in China since the 15th century, widespread addiction to the substance didn’t begin to take form until tobacco was introduced to their culture in the late 16th century. Once tobacco arrived in Europe from the Americas in the 16th century, it quickly spread across the globe. 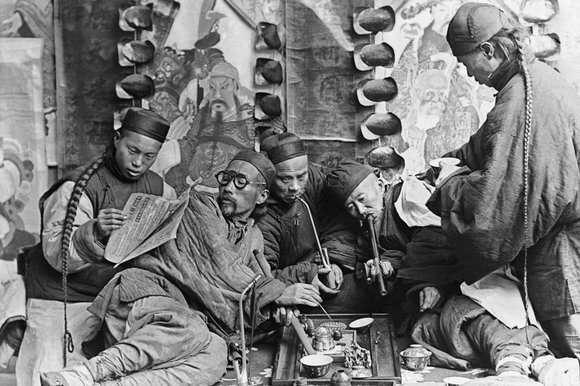 When Chinese opium users discovered they could mix their favorite drug with tobacco in their pipes they were euphoric, literally. When smoked, opium has a more intense effect and is more addictive than when taken orally. Opium prohibition in China began in 1729, despite this opiate use grew at a steady pace. By 1905, it is approximated that 25% of chinas male population were addicted to the substance.

This is where opiate use gets sticky, addiction. Currently, it’s estimated that roughly 1-2% of the American population is currently addicted to some form of opiate. Whether that be heroin, opium, or an over the counter opiate such as codeine, hydrocodone, methadone, morphine, oxycodone etc. Many people take opiates for a brief amount of time to manage pain from a surgery, injury, or what have you. If you are prone to addiction, and then you have to take something that can be extremely addictive to manage your pain; it doesn’t always turn out well. While most painkillers are opiate based there are a few non-opiate painkillers, which are commonly referred to as analgesics. The most popular of these being acetaminophen, ibuprofen, and anticonvulsants such as Gabapentin. You can take a couple ibuprofen, but it’s doubtful that it will make a difference after major surgery. Hence the extreme popularity of opiates, they work exceedingly well for pain management.

This brings me to my main point, marijuana is a very effective painkiller. Combining medical marijuana with opiates can lead to reduced opiate dosages. It has been scientifically proven that cannabinoids (CBD), a classification of chemicals found in marijuana, have pain relieving properties. For this reason, when smoking/ingesting marijuana for pain relief it’s important to get Indica strains. Indica’s generally have higher levels of CBD’s and lower levels of tetrahydrocannabinol (THC) the main psychoactive compound in the plant. Compared to sativas, which generally have higher levels of THC and lower levels of CBD’s. So essentially if you smoke/ingest Indica’s you may experience more comprehensive pain relief and maintain a clearer head than if you were to smoke a sativa.

Marijuana is one of the best nonopiate pain relievers. If you are experiencing chronic pain, consult your doctor and they may be able to prescribe you medical marijuana.