If you’re one of the over thirty million Americans who smokes weed on a regular or semi-regular basis, you may have wondered what the potential health concerns are. Smoking can cause tumors, cancer, and lung damage from tar and heat, the list just goes on. However, most facts when it comes to smoking are tobacco related, but just how harmful is marijuana smoke?

While tobacco most certainly can cause tumors, two of the main chemical compounds in marijuana, cannabidiol and tetrahydrocannabinol have been shown to reduce the size of tumors, not cause them. In addition to this, while the heat from marijuana smoke does cause inflammation and damage to the lungs, cannabis also has anti-inflammatory properties.

According to a study published in the Journal of the American Medical Association in 2012, smoking up to a joint a day can actually increase lung function. With tobacco smokers they examined, the relationship between how much they smoked and their lung capacity was directly related. The more they smoke, the less oxygen they could exhale. Whereas for people who smoked the equivalent of one joint a day had a larger lung capacity than people who didn’t smoke at all.

It was, however, unclear if that was due to the fact that marijuana smokers simply trained their lungs to have larger capacities from the act of taking large hits or otherwise. At increased levels of smoking cannabis, however, lung function began to decrease. It is heartwarming to hear that there is at least some evidence to suggest cannabis smoke isn’t horrible for you. The study was conducted over the course of 20 years and included more than 5000 men and woman.

Regardless of a single study, It still seems safe to assume that smoking anything can’t be good for you. If you’re trying to keep your health and your lungs in as good of shape as possible, there is a harmless alternative! You may have heard of vaping, many tobacco smokers around the globe have been slowly shifting to vaporizing ejuice (typically propylene glycol mixed with nicotine and flavoring).

While this may be the current new craze, vaporizing has been around for centuries. One of the first examples of vaporizing would be in the form of a hookah, instead of directly combusting herb with flame; they put a coal on top of metal. This allows the bowl and herb to heat up to a temperature in which you’re inhaling vapor instead of smoke. By vaporizing you are mostly inhaling the different chemical compounds contained in whatever herb instead of the actual carcinogenic leafy material. 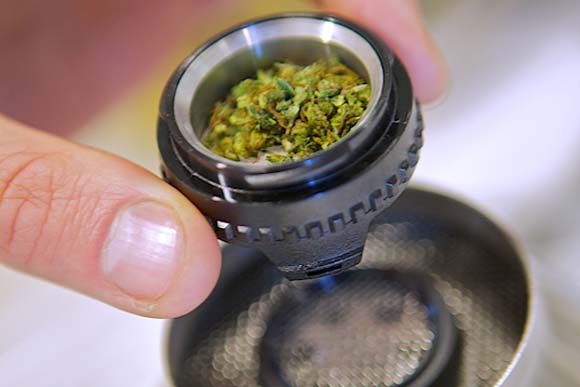 By vaporizing cannabis you can effectively set the temperature of your vaporizer to the approximate temperatures that CBDs and THC vaporize at. By inhaling just these main active chemical compounds in marijuana, you can effectively get high without damaging your lungs. While there is inevitably some heat damage caused by the hot vapor, it’s so minuscule that it’s barely worth mentioning. It is also healthier to vaporize straight herb than most hash or cannabis oils. As some of these extracts can contain leftover chemicals from the extraction process. When vaping oil, it’s definitely good to make sure you’re getting it from a reliable source.

If you want to go about vaporizing your cannabis, you can typically get one of two setups, a portable vape, and a ‘desktop’ vape. Portable vaporizers are typically very small and easy to carry around with you. While many are rechargeable some are also disposable. Depending on the quality of the vaporizer it could last you anywhere between five days and five years. There are many benefits of using a portable vaporizer, one such being that you can bring it anywhere and vape conveniently on the go. In addition to this, they are also extremely discrete in comparison to pretty much every other method of ingesting marijuana. If you’re looking to get high in public, a portable vape is the right choice for you. As far as anyone knows you’re simply inhaling nicotine. 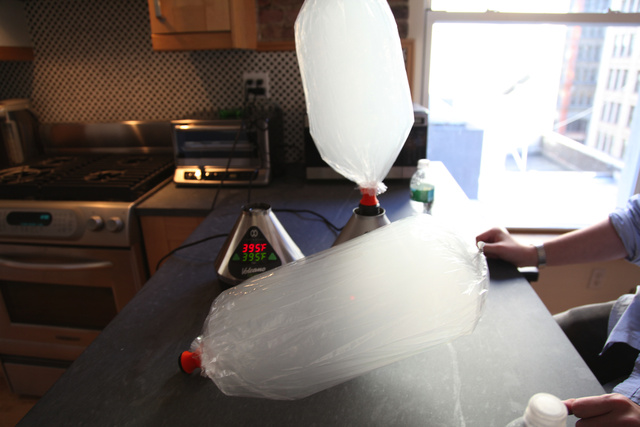 Desktop vapes, on the other hand, are not very portable at all. They typically have a power chord and they need to be plugged in at all times when in use. Desktop vapes are the way to go if you want the best vaporizing experience possible. While portable vapes certainly get the job done, desktop vapes are just so much nicer. You can typically pack more in the bowl, allowing for a longer vape session. You can also inhale the vapor using a couple of different methods depending on what vaporizer you have. While usually vapor from desktop vapes is inhaled via a plastic tube, some also have the ‘balloon’ option. This allows you to take a specially designed vapor balloon and attach it to the part where you would normally attach your plastic hose. Turn your vape on and within a few minutes, you’ll have a balloon completely full of vapor. I don’t know about you, but to me, there’s something about inhaling cannabis vapor from a blown up plastic bag that’s just awesome.

Overall, vaporizing seems like a healthier alternative to inhaling carcinogenic smoke. If you haven’t tried vaping, I highly recommend picking up a decent vape and giving it a go. There’s definitely something a little crisper and cleaner about a vape high.