Depression is a psychological disorder that can affect everyone differently. Common symptoms include loss of appetite, loss of interest in hobbies and activities, trouble sleeping, or just plain feeling sad. The list of symptoms goes on, yet the list of common treatments is surprisingly short. If you go to a doctor and explain that you have depression, they will most likely recommend eating healthier, getting at least 8 hours of sleep a night, exercising regularly, etc. They might recommend you go see a psychotherapist, or prescribe antidepressants; however, antidepressants can take up to weeks to work, have undesirable side effects, and can affect everyone differently.

This leads me to my main point, can medical marijuana be used as an antidepressant? According to M.D Lester Grinspoon, in his essay, a history of cannabis as a medicine; Robert Burton in his work the anatomy of melancholy published in 1621 suggests that cannabis can be used to treat depression. Grinspoon also says that “I think cannabis has a lot of potential in the treatment of mental illness,” but goes on to say that like any medicine, “it will not work for everyone.”

Although the concept of treating depression with marijuana has been around for some time, far more research needs to be done on the subject before any conclusions can be made. A study in 2006 showed that people who took marijuana daily had fewer depressive symptoms than those who did not. However other studies show that while low amounts of THC can produce serotonin and act as an antidepressant, large doses of the substance can actually worsen depression.

One of the most common causes of depression is chronic stress, researchers at the University of Buffalo began looking into treating this cause of depression with medical cannabis. While these researchers performed their studies on animals and not humans, their study showed that chronic
stress can prevent the natural production of endocannabinoids in the brain. Some of these same chemicals produced by the endocannabinoid system are also found naturally occurring in cannabis. Smoking or ingesting medical marijuana may help restore balance to the endocannabinoid levels in your brain, thus reducing depression. However, far more research needs to be done on the subject before any staunch conclusions are made.

While we can view this from a purely analytical and fact-based perspective, there is also another viewpoint you can examine the subject with. Many have claimed that marijuana has helped with their depression; to some, it has even been known as green Prozac. 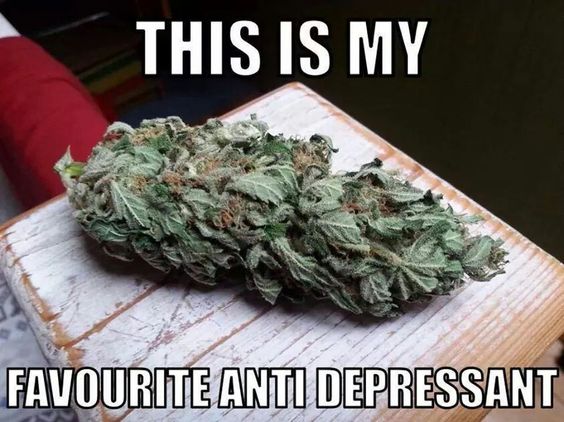 If you’ve ever smoked the green sticky, you’ll know that in most cases it simply makes you happier. Music sounds better, food tastes better, it relieves your stress, it can relieve different aches and pains in your body, and just lifts your mood in general. While currently, we can’t draw any guaranteed conclusions on whether or not marijuana helps with depression, there is evidence that points to the fact that it does. If you’re struggling with some form of depression, give it a shot!