Migraine is a headache disorder in which moderate to severe headaches recur periodically. A migraine headache typically affects one side of the head more than the other and the pain associated with it can at times come in waves. In the most severe cases, they can last for up to seventy-two hours, but an average migraine usually lasts for about four hours. Migraine headaches are worse than normal headaches in nature due to the fact that they are often accompanied by additional symptoms. These include nausea, vomiting, and extra sensitivity to light, sound or smell. The cause of migraines has not been pinpointed, but most agree that it is due to a variety of environmental and genetic factors. Approximately 15% of the global population is affected by migraines and roughly two-thirds of cases run in families

Migraines are usually treated with over the counter pain medication such as aspirin, ibuprofen, and paracetamol. However, for those who find these medications ineffective others such as triptans or ergotamines may be used. If you’re not one for taking pharmacueticals, using medical marijuana to manage migraines might be right up your alley. Currently the only state that has migraine headaches as a qualifying condition is California. But people who have migraines across the country generally agree that medical marijuana is an effective treatment.

A study published in early 2016 from the Skaggs School of Pharmacy and Pharmaceutical Sciences at the University of Colorado examines the effects of ingesting cannabis on migraine headaches. The research was conducted on 121 adults who suffer from migraines, and many interesting statistics were found. In the people who had regularly ingested cannabis, the average number of migraine headaches experienced monthly went down from 10.4 to 4.6

Nearly 40% of subjects claimed they experienced positive effects from ingesting the substance. Roughly 20% of people said that medicinal cannabis prevented migraines, and about 11% of people reported that cannabis stopped their migraines alltogether. And a staggering 85% of subjects stated that they had fewer migraines per month during the period of time they ingested cannabis. Inhaling medical marijuana proved to provide the fastest relief for people with migraines. As expected edibles took longer to relieve migraine symptoms and had a higher chance of causing unwanted side effects such as fatigue or intense euphoria. 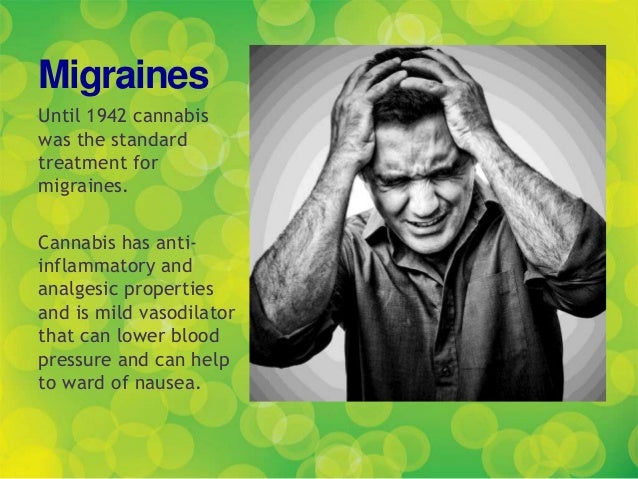 Not only can medical marijuana help regulate the pain from migraine headaches with its analgesic properties, but it can also help with one of the major negative symptoms migraines typically produce. Nausea and vomitting have long since been quelled by a quick puff of medicinal cannabis, it’s ability to supress nausea is one of the main reasons it is prescribed to HIV and cancer patients.

This is just one example of medical marijuana’s ability to treat nausea, countless others could be cited. And if medical cannabis can help cancer patients undergoing chemotherapy not vommit, I’m sure the same concept can be applied to those living with migraines.